It was a busy weekend, thats for sure. Between SCUBA tune-up and discovery dive sessions, I feel like I’ve been rode hard and put away wet.

I taught my first SCUBA tune-up class this weekend. It was only two people – thank God – but I was still pretty nervous. See, I’ve never taught anything really, so I wasn’t sure how I was going to go about this.

The class started on Saturday. Glancing at my cheat-sheet from time to time, I was able to get though the classroom portion of the course pretty well. We went over dive tables, which everyone just loves to work with. After that we talked some about the dangers of diving, and went into some of the physics. I’d say the classroom portion took about 45 minutes, and then we were headed to the pool. However, there was a power outage at the pool so we ended up postponing the pool session until today.

Looking back, I’d say there was some things I could have done better. I have a tendency to rush things, and that really doesn’t work well when you are working with others. I don’t know if my two students noticed it, but I definitely caught myself rushing several times. Also, I think I could have done a better job of making one of the more nervous divers more comfortable. I guess I need to work on my “people skills.”

Once we got into the water, things went smoother. I probably could have done a better job of explaining the basic skill drills that we were doing, but they seemed to pick it up really well. At the end of the day, all were happy and had a good time. It seemed like they possessed the confidence in themselves that they lacked before the class, so I’d call that a success. 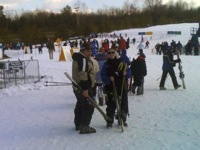 Its Friday evening when Trey has the crazy idea that we should drive directly to Ski Liberty. Being that I spent most of my life in Texas, I never learned how to ski, and although there is a fun bar on the premises, this deficiency tends to make Ski Liberty less than a 100% balls-out shred-fest for me.

This time will be different though. I’m informed that Trey’s sister Alexis will be joining us, and she also doesn’t ski well. Hey! That means I won’t have to be the only donkey falling on my butt all day! Sure, sign me up! So all 3 of us pack lightly and head on down the dusty trail.

Last time I tried this, it was snow-boarding and I can tell you with 100% certainty that I HATE that. I’ve always been a skate-boarder and I had kinda’ thought the skill would transfer over, but no it does not. Thats OK, I hear that skiing is easier so I’m willing to give the mountain another shot.

By the time we get there and settled in our room, its 10:30PM so we head on over to the bar on the premises. I think it’s called McKee’s Tavern or some contrived BS, but I don’t care if its called the Out House as long as the booze is flowing and the crowd isn’t boring. Imagine our horror when we reach for the front door only to find it locked, and all the lights turned off!

I’m going to take this moment to go on a bit of a tangent:
This is a phenomenon that I’ve only witnessed since moving to the east coast. See, where I’m from the bar is opened during the day and remains open until 2AM. It doesn’t matter if there is one guest, 50 guests, or no guests. The bar stays open during bar hours! Period! Out here it would be HOURS before closing time and the bar could still be closed. What’s up with that?? If you can’t count on a bar being open before 2AM, I ask you what CAN you count on?? The commies are taking over I tell ya, but I digress…

As I mentioned, we’ve been here before and we’d heard that the bar near the park entrance, the Four Seasons, was an OK place. Now I’ve been in many bars, and I consider myself a pretty good judge of a place. But the Four Seasons always gave off this unpleasant vibe to me. Having no other choices, I held my tongue and we entered the place. 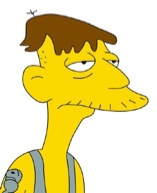 I was pleasantly surprised – no records skipped, it looked like the patrons had most of their teeth and not too many extra chromosomes. We found a spot at the bar and proceeded to have a good old time occasionally speaking to the locals and passing around the shots. It wasn’t until the night was nearly over that we finally met the quintessential banjo-wielding mountain-yokel, who we will refer to here as “Cletus.”

Apparently Cletus had just gotten out of the state pen, probably for burning a cross in somebody’s lawn, and was feeling meaner with each glass of $1 beer he could quaff. If I were to guess, I’d say he had spent at least $20 by the time that he entered our lives. To make a long story short, we nearly ended up in a messy scrape with this man of the soil, but we somehow escaped back to our hotel. We then decided to pass out and get some sleep before the morning ski sessions. 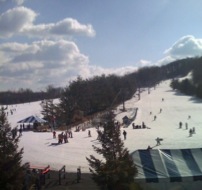 After a fitful night’s sleep, we arise in the morning to fresh snow on the mountain. This will be my first time skiing and Alexis hasn’t skied in years, so we both decided to take advantage of a one-hour lesson provided by the hotel. Wow. I’m sure glad we did it, but it was a LOT of hard work! I was surprised how after only a few tries, I was feeling confident and able to control my speed within reason. I even did some small hockey-stops! Of course all this was on the wussy-slope.

It wasn’t long before I was feeling like the jedi master of skiing, and I figured it was time to graduate to the next level of slope. This was my first mistake. Here is a picture taken of me just before I began my “run of a thousand crashes.” 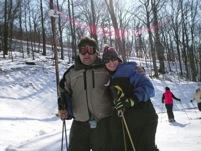 Just after that picture was taken, I turned around and actually got a good look at the slope. Oh man, this was no wussy-slope at all! What am I going to do? Ride the lift back down? Did you see how many people are down there? If I did that, there is no way I could show myself in the bar later. So, I bolstered my confidence and pointed my rental skis down the mountain.

It was at this time that I realized 2 important things:

1.Making the wedge-shape with my skis no longer had the same slow-down effects here as it did on the wussy-slope.

2.The one-hour lesson didn’t cover the mystic art of “turning.”

My guess is that they just kinda’ figured us newbies would stick to the wussy-slope and not need these advanced techniques. That would probably have been a good idea, but it was too late to consider that now. I had the unpleasant task ahead of me of learning to stop, slow, and turn while not flying off the mountain, running into a tree, or breaking the sound barrier! I think I fell no less than 6 spectacular times on the top 1/3rd of that slope before it leveled out enough for me to barely make it the rest of the way down. Lesson learned, and back to the wussy-slope for me!

Trey and Alexis decided to go hit the bar, but I wasn’t satisfied yet. I couldn’t end the day on such a low point. I just knew I could ski better, and I still needed to get the whole “turning thing” down better. So, I told them I’d meet them in the bar, but I was going for one last run on the wussy-slope.

As I ride the lift to the top, I’m preparing myself mentally for the task at hand. I’m also noticing that the sun has been out all day and the snow on the ground looks a little more like ice. At the top of the lift, my suspicions were verified by a snow-boarding teacher warning his class – the mountain was all ice now.

Of course, this is just the wussy-slope, and I had been going down this one all day long. What could possibly go wrong? Well, its like this:

When snow becomes ice, that wedge shape that you make with your skis when you want to slow down does nearly nothing for you. Further, the ground is really slick and SOLID, so falling is really going to be painful.

About midway down the slope I realize that I’m completely out of control. What’s worse, there is a HUGE group of people at the bottom of the hill and I don’t see any clear place that I could steer towards, even if I COULD steer. I’m gripped by abject terror as I see the unsuspecting women and children that I am hurtling towards at incredible speeds.

At moments like this, time seems to slow down. One second feels like ten. I’m searching my mental database for the appropriate warning that I need to yell before I collide with this massive crowd at bone-shattering speed:

I finally settled with screaming “OUT OF CONTROL SKIER!! LOOK OUT!!”

As I approached the crowd at blinding speed, I readied myself for the inevitable crash that would surely destroy me, and most likely the poor unsuspecting souls that were unfortunate enough to be in my path. My memory gets a little hazy at this point, and I can’t tell you exactly how it happened, but before I knew it I was miraculously through the crowd without a single hit!

My skis are in a wedge shape still and I’m bearing down for all I’m worth, trying to slow down before I run out of snow/ice. Somehow I ground to a stop and when I turned around to see the people I had just passed through, it was like they didn’t even notice me. Well, I had had enough, so I limped on over to the bar to mentally recover.

Would I do it again? Sure. In fact, I need to go back and get my “turning” down better! Skiing is fun!