It started off as a perfect day. The skies were blue and it wasn’t even too hot. Checking the weather before I left the dock, I could tell that we had a chance of rain late in the afternoon, but the chances weren’t very high so I wasn’t too worried about it. We loaded up the boat and left the dock late – around 2:45PM – and headed downriver to Rick’s on the River at Fairview Beach. The ride was as smooth as glass, and it seemed like the day couldn’t get any nicer. After about 40 minutes, we arrived at Rick’s, and I went up on deck to drop the anchor.

A dirty little secret of mine was that my anchor rode on this boat previously had no chain, and frankly I wasn’t too worried about it until last weekend at Tim’s 2 when my anchor started slipping. This prompted me to finally add chain to my rode a few days before our departure, and I was excited (in a geeky kind of way) to get to use it on this trip. Unfortunately due to our late start we missed rafting up with some friends. They were concerned about the weather turning, and decided to head back to the marina. I thought they were being a little over-cautious, but who am I to judge? So down the anchor went.

With the anchor set, it was finally time for a beer and some relaxation. It was my friend’s birthday, so after a while we decided to go ashore and enjoy the bikini contest and food at Rick’s. It took a while, but we were finally able to signal the water taxi and get picked up. I knew the day was getting a little late, so once we got to our table, I checked the MyRadar app on my phone to see where the weather was at the time. To my relief, the storm system was still way out west of Charlottesville, so I knew I could relax for a while. Not really…

After watching the bikini contest and getting some lunch, I decided to check the MyRadar app again. To my horror, the storm was MUCH closer and stronger (mostly red now on the radar app) than I figured it would be! The dark clouds had not yet arrived here, but a quick look upriver told me that the radar was not lying. What’s worse – we were cut off from returning upriver to the marina! 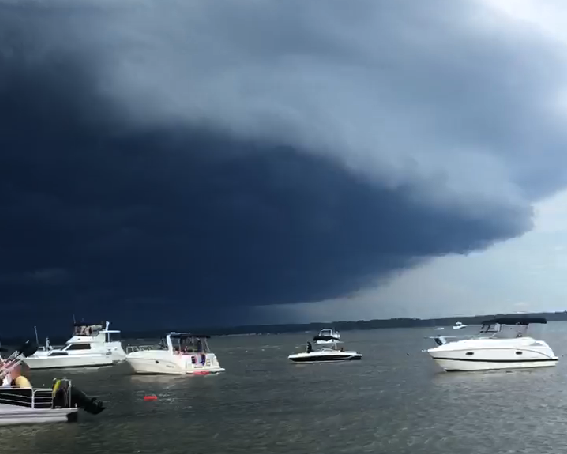 I’ve been through thunderstorms before in a previous boat years ago. I remembered it was not a fun experience, and it was the last thing I wanted to go through again. Knowing that my options were now severely limited, I decided that the best course of action would be to leave the boat anchored and ride out the storm on shore. The only problem was that I had some items in the cockpit that I didn’t want to get wet, so I was going to have to make a quick trip back to the boat to square it away. My plan was get aboard, put away the gear that didn’t like water, put up the canvas, and let out a little more anchor line. Then I could go back ashore knowing that I did all I could.

I got to the water taxi, and told the driver that I would only be aboard my boat for a few minutes while I made preparations for the storm. He understood, and we made our way back to my boat. After dropping me off, I watched him drive the water taxi a little ways off to wait for me. Knowing I had a way to get back ashore, I confidently started going about the business of storm preparation. It didn’t take long, and once I had all the canvas up I turned around to signal the taxi that I was ready to be picked up. That’s when I realized he had already gone!

I thought maybe he had gone to pick up other people, so I climbed up on the bow of my boat to flag him down. It was then that I realized that he was nowhere to be seen! This was not good, because there was still a HUGE crowd at the dock that were still waiting on him to take them back to their own boats. The people on the dock were on the verge of panic. I got on the phone with my friend who was still on shore, and he started looking for the taxi as well. After a good 10 minutes, the taxi finally appeared and loaded up people from the Rick’s dock.

By this time, the water had started to get pretty choppy and I could tell that the taxi driver was having a real hard time transferring people onto their boats. I was still on the bow of my boat facing shore when I saw the taxi driver head back to the marina. I didn’t understand why he wasn’t coming for me – until I finally turned around. Bearing down on me was the dreaded storm front – a giant angry savage wall of doom! It had moved in so fast, and the sight was so shocking to me, that it took me a moment to realize what I was looking at. I was screwed. I was in the exact place that I DIDN’T want to be in!

I quickly scrambled down off the deck and cranked up the engine. My thought was: If the anchor should somehow fail, at least I could maintain position and steerage. With all my prep work complete, all I could do now was sit there and wait for the storm to hit. There was a few other boats still at anchor and I could see people huddled inside, but I began to notice that most people had weighed anchor and were steering into the coming storm with minimal power. I thought this was probably a better idea, so I started to go back on deck to pull up my anchor too, but it was too late – that was when the storm finally hit us. 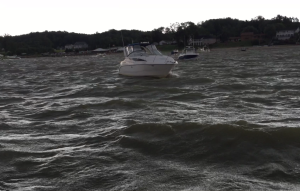 It started with a violent blast of VERY cold air, and the wind just didn’t stop blowing! In no time, the water became choppier than I’d ever seen it before. From my position at the helm, it looked like 5-6 ft waves, maybe higher, that were crashing into the bow of the boat. The anchor line strained, but somehow held steady. I looked around at the other few boats also anchored and they seemed to be holding as well – or maybe we were all dragging at the same rate? The shore didn’t seem to be getting any closer for the moment, so that was a small relief.

Soon the storm found it’s rhythm and we were getting thrashed by the wind and the waves. It’s a disconcerting thing when you see your bow actually go under the waves numerous times. I wondered how long the boat could take it, and I was worried that the anchor would let loose. I then realized that I may be in a bad spot. The boat was thrashing so hard now that it was impossible to get out on the deck and weigh anchor. If the anchor were to drag or let loose completely, I’d have to drive the boat forward into the wind and waves, while somehow avoiding running over my own anchor line! Too late to consider that now – the die was cast and there was nothing left to do but hold on tight and pray.

Those of us still at anchor got the privilege of enjoying a nice 1 hour of non-stop violent pitching, rolling, and thrashing before the storm finally let up. When it did, my friends were able to get the taxi to bring them back to the boat. I was able to get up on deck and weigh anchor, and we headed slowly upriver home. The ride back to the marina gave me plenty of time to think about what all had transpired, and what lessons I had learned from this horrific experience:

Thankfully mine, and the other boats that were anchored with me at Rick’s made it through the storm with no damage. Sadly, other friends of mine who were at Mattawoman Creek were not as fortunate. I’m just glad that nobody got hurt. That was a huge storm, and not one that I will soon forget!