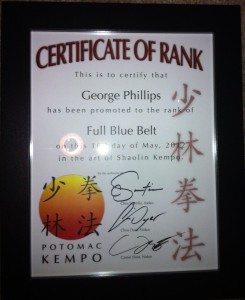 I had a belt test at Potomac Kempo this past Friday.  Because these tests are typically multi-hour suffering sessions, I was more than a little nervous.  It’s been a while since my last one (for blue stripe) and each test is a little different.  I remember feeling like the test for my purple belt nearly killed me.  All in all, I was really not looking forward to this test!

You really want to prepare for a belt test.  I normally sweat gallons during this activity, and we have a rule that if you are going to puke, you must puke inside your gi and not on the dojo floor.  So of course I try to spend the day of a test hydrating like a mad man, and making sure I don’t eat after noon.  That didn’t exactly happen this time.  Work circumstances dictated that I had to wait much later than noon to eat, and I barely had time to drink any water at all!

Around 3PM I finally got the chance to scarf down some food, so I headed to Chipotle and gnawed on a giant burrito.  The nice thing about a test day is that you can pretty much eat anything you want, knowing that you will burn off all of the calories, and then some!  I left there sufficiently stuffed, but unfortunately that meant that I had a giant burrito in me, and my metabolism isn’t all that fast.  What I had just done was to arm the ole’ “puke cannon,” and I knew it.  Also I still wasn’t properly hydrated, but work didn’t give me much time for that.

I finally got off work and headed to the house to pickup Trey.  As we were headed to the dojo, I was frantically trying to gulp down gatorade and still burping up Chipotle.  Maybe getting the extra hot sauce on the burrito wasn’t the best idea I have ever had?  It was far too late to worry about that now.  Trey and I took a couple minutes to reassure each other that we were going to survive this event, and we entered the dojo.

Once inside, we joined the usual pre-test banter with the other students.  You can always expect a healthy dose of “gallows humor” before a test, so of course I warned everyone of the looming burrito threat.  The warning was well taken, and several folks mentioned that they were going to keep a safe distance should things get too “interesting.”  It wasn’t long before our sensei came in and ordered us all into position.  Here we go!

I mentioned before that I was nervous about this test, but there were a few factors that I had not yet considered:

This put me in a much better position to tolerate the exertions of the evening.  I realized this almost immediately when we were told to start doing burpees.  I fell into the motions and it was much less stressful than I thought it would be.  In fact, in some strange way, the burpees just felt familiar and actually gave me comfort!  Of course we did a lot of different exercises to start things off, but the “dreaded burpee” was mine now and I had nothing to fear from it.

As the evening progressed, we did a lot of running (also something I’ve been doing on the side) up and down stairs, a ton of burpees (I lost count), along with our normal forms, techniques and drills.  During all that time, I honestly felt like I had unlimited energy and could take any punishment that was dished out!  “BRING IT!”  Before I knew it, the test was over (it had actually been hours) and we re-assembled into position in the dojo.  I was hot and sweating like crazy, but I felt like I could have gone for at least another 2 hours!

In conclusion, I think the loss of 40 pounds, burpee tabata, and some running (just a few miles on occasion) really helped me get through that test.  I have about 30 more pounds to lose, and I can’t wait to see what the next test will feel like!