This weekend was all about DM skills attempts. On Saturday it was the pool, and Sunday was the quarry. I have to be honest here. Some of these skills looked pretty simple in theory, but in practice became something else.

They are in fact very stressful, and difficult. Add to that the fact that I’m grossly overweight and out of shape, and I smoke like a chimney. I guess I shouldn’t be too surprised at my performance this weekend. Lets see how I did:

So in a nutshell, this past weekend sucked! My plan? Well, its like this:

•I quit smoking on Sunday night.
•I’m running up 16 stories worth of stairs every day.
•I’m going to start riding 5 miles a day
•Wednesday is pool-day.
•I may throw tennis into the mix too.

I just HAVE to get in better shape so I don’t die, and I can pass this crazy class damn it! NO SURRENDER! 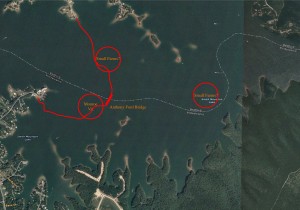 Occasionally while looking for new places to dive, I’ll run across a post here or a blurb there mentioning a whole town at the bottom of Smith Mountain Lake in Virginia. Of course, nobody has a map of where the town can be found underwater, and there are no diving charters that can take you there. Is this an urban legend, or is there really something down there? Well, the one thing I really hate is not having information, so I decided to do some research of my own!

First, some history:
Smith Mountain Lake is the result of a dam being built back in 1963 downstream of the Blackwater and Roanoke rivers. The two rivers filled in the land and now there is a pretty lake there! However, before the dam was built, it is rumored that there was once a town where the waters are now. Some websites even talk about a beautiful church with high steeple, countless stores, and scores of homes down there!

Research:
I decided to take a whack at finding this mystery town. Naturally, my first resource was Google Earth. My theory was that the town would probably exist somewhere near where the two rivers met. However, Google Earth offered few clues as to the original pre-dam path of the either rivers.

Finally I did some searches on the USGS website, and came up with pay dirt! USGS had some aerial photos from 1949 that were nearly perfect. The evidence is pretty convincing. You can definitely see man-made structures all over the area, as well as what Google Earth calls the Anthony Ford Bridge (historical site). You can find the photos here. Study the “then and now” shots and see if you can identify the bridge!

What Was I Thinking??

Perhaps I was thinking, “Gee, now that Master Diver class is over, I’ll have too much spare time on my hands and not enough dry material to read.” Apparently thats the case, because I signed up for Divemaster class tonight. For those of you unfamiliar with this class, it includes some EXTREMELY challenging swim-work. For example, there is a timed non-stop swim of 900 yards. I don’t know if you’ve noticed from the pictures, but I’m one out-of-shape bastard! Hell, I sometimes think I look more like a black manatee than a diver! Needless to say, I’m going to be training all winter for this craziness. At least I have a year to complete it, so I should be ok. Besides, I needed a good excuse to get back into shape anyways.

I think the first pool session is this weekend. I’m not sure what to expect but I’m sure I’ll find out!

So begins the Master Scuba Diver class at Lake Rawlings. Today we dove like crazy! I think I used 8 tanks in two days! Met some really cool folks and had some awesome dives! Thanks go to Janet and David Hays for putting together a fun weekend. I favorite part was the light salvage and night dives. With all the divers and their lights in the water that night it looked like a disco down there. All in all, I could feel myself getting more and more “dialed in” as the weekend progressed.

Also important to note is that I finally reached dive #50 over the weekend! YAY! That was a goal I really wanted to reach this year and I’m glad the weather cooperated. Now if I can get to 100 next year, that will be perfect! 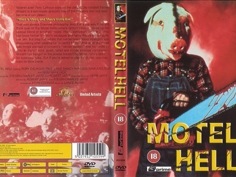 Well, I tried to sleep there but I just couldn’t being myself to pull back the covers on the bed. So, I ended up getting out of there and heading 20 miles further south to the Holiday Inn Express, where I finally enjoyed a clean and quiet room.

The following day’s dives were great. Got some fun video and generally had a good time. Was a nice prequel to the Master Diver class I would be attending over the next couple days there.

We had our orientation last night, and I have to say that this looks like its going to be a very detailed class. The book is a bit thicker than most, and covers a lot of ground. This weekend we are planning some dives at Lake Rawlings to get things moving along. I’m actually headed down there on Thursday afternoon in order to claim a good spot and get some dives in on Friday. I should get some good pictures up after this weekend!