Slacking Off? Not a Good Idea! 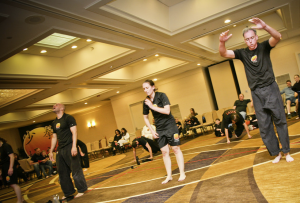 It seems that I’ve made a terrible mistake.  Last year during a Potomac Kempo tournament I was able to do 355 burpees in one hour.  Leading up to that time, I had been doing burpee tabatas after every group class.  After that event, I kind of slacked off on the whole burpee tabata thing.  Sure, I’d do one ever so often, but it was becoming more and more rare.  I can’t remember exactly when it was, but at some point I stopped doing them altogether!

This past tournament we did a similar event where we had to do burpees for only 20 minutes.  While I was able to crank out 127 of them, I certainly didn’t feel good about it.  I remember being very glad that this event wasn’t for a full hour, because I didn’t think I could have handled that.  Looking back, those tabatas probably allowed me to survive that previous one hour session last year.  This time, because I was out of “practice,” it hurt a LOT more.

Not only that, but I’ve also noticed that I’m getting “winded” easier than before, which is also causing me issues with running.  The other day I ran out of steam after only a couple miles!  This forced me to take a hard look at the status of my fitness, and come to the only conclusion possible:

I’ve been slacking off, and getting less fit as a result.

That just won’t do.  I’ve worked too hard to get into some semblance of fitness, and there’s no way I’m going to give that up.  So I decided that I’m going back to my daily burpee tabatas, and doing a triple tabata on Tuesdays at the end of every Academy class.

Those who are familiar with our Academy classes (and regular classes too) know that this is going to be a difficult commitment to adhere to, but it must be done regardless of my exhaustion.  As always, I’ll be relying heavily on the support of my peers in class to drive me to continue, and keep me honest.  Luckily, everyone at the dojo is very cool, and I’m pretty sure they won’t let me weasel out!