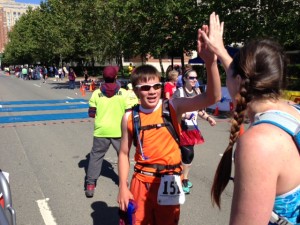 The dojo was closed on Monday and I knew I’d be getting a little slothy, so this past weekend I decided to run in the Alexandria Running Festival.  My wife and nephew Daniel were doing the Half Marathon, but that’s a little beyond my 10 mile limit, so her sister Aimee and I decided to just run the 5k.  I only have a couple comments about this run:

1. For something named the Alexandria Running Festival, the organizers and the city made sure that we ran the most boring and non-scenic route possible.  Although the half-marathon got the pleasure of running through Cameron Station and Ben Brenman park, the race was mostly routed down Eisenhower Avenue – not exactly the prettiest part of Alexandria.  Of course we 5k runners only got to experience the desolation of Eisenhower Ave, and nothing else.

2. Unlike other running events where crowds of people got together along the route to cheer on the runners, this event had exactly TWO people cheering, and one of them was my wife!  The lack of a “cheering section” really did affect the general mood of the event.  Of course, because it was mostly on Eisenhower Ave – the industrial side of town – there really wasn’t many places for people to gather and cheer.  Maybe next year we could be routed through parts of the city that people would actually want to run through??

3. A 5k run is really just a warm-up.  I’m not exactly Bruce Jenner, but I’m starting to need more distance in a run than just a few miles.  I think I’ll institute a 10k and above policy and see how that works out.

All in all, it was a fun day.  I’m glad my wife and nephew got to do the half-marathon that they’ve been training for, and Aimee and I had fun doing the shorter run.  Sure beats sitting around and watching TV all day!

You can view some of the photos of the event here!