Truth and Logic or Emotion and Fear? 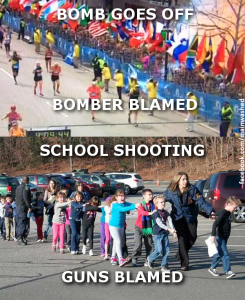 This was originally written by Kelly Cobean, a friend and coworker.  It has been reproduced here with his permission:

First and foremost, my heart goes out to all of the victims and their families. My prayers are with them in this difficult time. I hope the coward(s) that perpetrated this senseless act of violence is/are caught, tried, and sentenced to a swift death.

With that said, I hope everyone can UNDERSTAND what this picture is implying and check their own thinking about what it means to be a responsible, ruggedly self-reliant American. This picture isn’t about bombs or guns, it’s about logic and how we take responsibility for our actions and how we hold others accountable for theirs. Are we acting out of truth and logic or emotion and fear?

A gun is a tool of sport, protection and resource in law abiding hands. Conversely, a pressure cooker and some scrap metal is a tool of pain, death and terror in the wrong hands. Because we cannot control the actions of anyone but ourselves, we cannot throw away or allow to be taken away, our right to defend ourselves against evil. We cannot trade liberty for security. It does not work and history has proven it to be a costly trade time and time again. But it is the agenda of the left.

Would a gun in the hands of a law abiding citizen have stopped the bombing? Maybe not. Would it have stopped any of the mass shootings? Possibly. Nothing is certain, but why not protect the chance it might have instead of eliminating it? We mitigate risk every day when we put on our seat belts, equip our homes and offices with fire extinguishers and see our doctor for a check up. Is keeping a gun in your home, or carrying one on your person such an outlandish step to take? It may seem to be right up until you need it, then it becomes the best decision you ever made. The question is, when do you get serious about being responsible for you?

With 350+ million of us in this country now, it is estimated that there are 437 citizens for every police officer. Too often the police, heroic as many of them are, arrive just in time to draw the chalk outline. It’s not their fault, they are not God, they are not omnipresent. YOU are responsible for you RIGHT NOW. It’s up to you to determine whom they draw the outline around. Focus hard on maintaining your freedom and protecting your rights. The world is a dangerous place, there is no denying it and there is no changing it

It is even more dangerous when you are defenseless against it.