What Good are Forms? 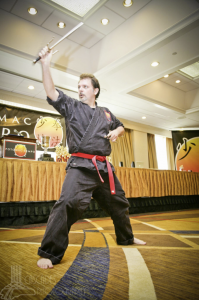 Part of the process of studying a martial art is the learning of forms.  I think the value of a form is commonly underestimated by newer students.  The new student may think to themselves, “I’m here to learn about fighting! Why do I need to do these silly movements?”  Or another may be, “What good will Kata 1 do me in a fight?”  What the new student may not understand is that the study of martial arts is not just about fighting – it’s about so much more!  Without getting too deep into that greater subject, I’m going to attempt to explain why I love forms, and why they are so useful.

Contrary to the belief of the new student above, a form is more than just a collection of movements. Every form is a lesson in itself.  They can be used to teach us to use our bodies in new and unfamiliar ways.  Like our kempos, each form that we learn should introduce and emphasize new concepts.  Sometimes these are new strikes, other times these are blocks, stances or more general principals.  The form also demonstrates how these movements could work together to achieve a goal (like defeating your opponent).  At first these movements may seem alien, but after much practice they become second nature.  This is important because in a fight when the adrenaline is pumping, one of the first things we lose is fine motor control.  It’s the muscle memory of the martial artist that gives him the edge – the ability to recognize and perform a technique without having to think about it.

Because forms teach us to move our bodies in new and unfamiliar ways.  This means that while we are learning, we must think about what we are doing in order to do it right.  The more difficult the form, the harder it is to memorize and perform.  This appeals to my geek-self because I love a challenge, and I love to use my mind.  I don’t mind taking a year to learn a form correctly, because learning and improving is part of the fun!

Powerful strikes and blocks are a necessity in martial arts, and forms allow us to practice our technique and power at the same time – something we can’t practice on our partners in the dojo!  Imagine breaking your partner’s nose, sweeping their leg, and stomping on their throat in group class, over and over again!  (I’m sure that there are folks who work with me that may have imagined this scenario numerous times, but I digress…)  That’s something you can only do once per partner, which means that you would quickly find yourself partnerless and unable to practice anymore.  Luckily for us, the air doesn’t mind being struck multiple times in many different ways at maximum power!   This is great news because we never want to get into the bad habit of not delivering powerful devastating strikes.

I started studying kempo because I couldn’t stand the idea of going to the gym.  For me, the thought of lifting weights or running on a treadmill (going nowhere) for an hour ranks one step above dowsing myself with gasoline and lighting a match!  If the gym was my only option for getting a good workout, I’d look like Jabba the Hut.  The dojo turned out to be the perfect workout venue for me, and probably saved me from an early heart attack.  Unfortunately the dojo isn’t open every day, which means some days I would be left with no George-acceptable method of working out.  This is where forms come in very handy!  I use forms to trick myself into working out.  A form done properly, with good technique, low stances and maximum power, should be exhausting.  Chain a few together and you have a real challenge!

Learning and using a form happens in phases.  The student must first memorize the basic movements of the form, which may take a long time.  Next the student adds technique, power and speed to the form, making it better.  Finally, once the student no longer has to think about the movements and techniques when doing the form, that form will start improving the student!  I still find areas where I can improve even my earliest forms, and that’s awesome!

So while you may find it frustrating to devote so much time and energy to learning a form, just remember that you are really just building a very powerful tool that can be used to give you a great workout and make you a better martial artist!